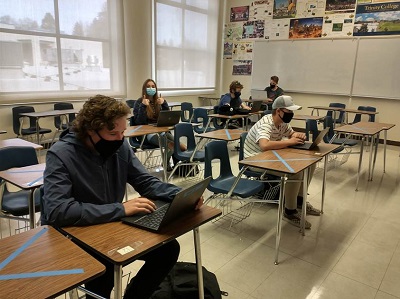 Way back in 1968 an Orange County school superintendent wanted to find a way to promote and reward academic excellence among high school students. The idea, chiefly, was to give scholastic achievement the same impetus as team athletics. The concept of the Academic Decathlon took off and was implemented in several California counties and eventually, in 1979, the California Academic Decathlon was founded. By 1982 the United States Academic Decathlon was formed. Today the decathlon is practiced all across the country each January and February.

Although the events take place in the beginning of every year, preparation begins as early as August, recruiting team members and starting the semester long training. Club fairs at local high schools start the process by building teams and acquiring materials and study plans, which are distributed by their coaches and thus the training begins.

El Dorado County Office of Education Communications Director Dina Gentry, APR, MBA, has been running the local heat since 2016 and said it has been quite an adventure. “Our goal is to provide some continuity in a year that is anything but normal,” said Gentry. “Our students deserve to have rich extracurricular experiences even in this time of exponential uncertainty. Transitioning to completely virtual competitions is a monumental undertaking and would not be possible without co-coordinator Paula Sordello and the many dedicated EDCOE team members, coaches and volunteer judges who have stepped up to make it successful.”

This year has been tremendous compared to the already Herculean task of normal Academic Decathlon years and, Gentry said, sometimes seem insurmountable. Yet the coordinators, team members and volunteers push on. Utilizing the online video conferencing platform zFairs for the competitions and maintaining distanced environments when in-person competitions need to be instituted, the decathlon has taken on a new look for the 2020-21 season.

At Oak Ridge High School Jeff Hassian, a 21-year Academic Decathlon veteran coach, prepares his team to defend its four-year winning streak. The 2020 state competition was too uncertain in the beginnings of the pandemic so the team chose to forgo the March 2020 California competitions.

Moving forward the Oak Ridge team aims to hold onto the No. 1 spot in the upcoming events and, according to Hassian, they have the support of the El Dorado County Office of Education to thank for the opportunity.

“EDCOE has been very supportive with moving the decathlon forward,” said Hassain. “That’s the real story here — how everyone has overcome the adversity of our current circumstances.” He shares the extreme pride he has for these contestants and how they “maintain a level where they strive for academic excellence, even in these trying times.”

Every year the decathlon is themed on a central topic. This year has the students studying the Cold War, no easy topic for anyone to learn, especially students who did not live through it. No doubt these students will come out of this competition with a deeper understanding of this historical era than many who remember it first-hand.