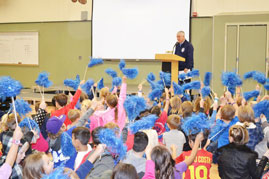 William Brooks Elementary has been recognized as a 2015 National Blue Ribbon School, only one of 23 schools in California and one of 341 schools nationwide to earn the distinction this year.

“That’s less than one-quarter of 1 percent,” Brooks Principal Kevin Cadden told students at a special Nov. 17 assembly, during which the transitional kindergarten through fifth-grade students waved blue pom-poms throughout. “You have a better chance of becoming a professional athlete than receiving this award.”

Cadden noted that the prestigious award wasn’t given to the school by chance. “We have a history of working hard here at Brooks,” he said. “There is a long line of excellent teachers, staff members and students who have taken the time to invest in something bigger than themselves.”