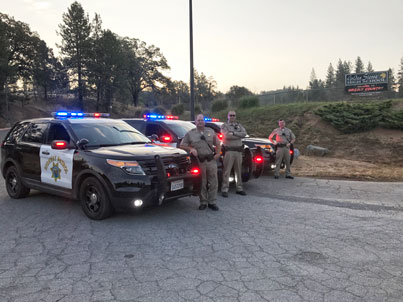 “The students and community are always our highest priority, and this large presence makes students that much safer during an exciting time of the school year,” Officer Hoey expressed. “Kids are not as alert during this time, and everyone must stay vigilant to keep them safe. We are here to protect the students and the public as much as possible.”

At Northside School, Aide Christina Kay, helped direct traffic and students.  She appreciated CHP’s increased efforts on the first day of school by praising the efforts of the Officers, ”We are always glad to see the Officers on our campus because it makes it easier to monitor the area. It’s a great presence on the first day of school when people aren’t paying attention like they should be.”

Placerville CHP Commander, Lieutenant Matt Stover, noted, “Throughout this campaign and the entire school year, we will continue to patrol all of the County schools.”

The partnership between Placerville CHP and El Dorado County schools is uniquely close, as Officers work hand-in-hand with Superintendents and Principals on a daily basis to support students, educators, and families. Recently, Officer Mike Powers spoke at Gold Trail School’s back-to-school night to reassure parents of their commitment to keep everyone safe and to explain the reasons for certain traffic laws. “We are grateful for Placerville CHP’s continued commitment to our schools,” County Superintendent of Schools, Dr. Ed Manansala, stated. “The strength of this partnership will help our communities for years to come.”

For more information about Placerville CHP.