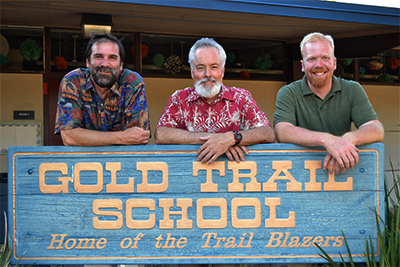 After serving more than 35 years at Gold Trail Union School District (GTUSD) as a teacher, principal, and superintendent, Joe Murchison deservedly entered retirement at the end of June. He has spent the last several decades cultivating a culture of family at their two school sites – Gold Trail Middle and Sutter’s Mill Elementary Schools. Generation after generation of students returns with their children and grandchildren to teachers who are received more like relatives than educators.

To commemorate Superintendent Murchison’s contributions, a massive, whole district farewell celebration including teachers, students, and staff was held in his honor. One morning at the end of the school year, Sutter’s Mill students were all bused to Gold Trail where the student population congregated on the large blacktop for the festivities. The program included teachers from both sites performing a choreographed dance to Frank Sinatra’s New York, New York and a flash mob made up of every student. Everyone bid Joe ‘farewell’ with a final, joyful, tearful sing-a-long dance to Elton John’s Rocket Man.

Event coordinator and physical education teacher, Keven Dunn, worked with many parties to produce this beautiful gathering and reflected, “There are so many great people who work here, and it’s important that we celebrate what they have done – it turns into a celebration for everyone.”

Superintendent Murchison held his final school board meeting on Thursday, June 22, where GTUSD team and community members presented several gifts and emotional sentiments to thank him for his passion and commitment. Gifts included a collection of pictures and well wishes from more than 1,200 contributors. He was moved to tears and remarked, “I am going to miss laughing with everyone the most. Although I came here when I was 31, I really feel like I grew up here. I lived here.”

Joe is not leaving GTUSD to just anyone, however, as two local educators with long-standing ties to the district will take the reins. Scott Lyons was the Principal of Gold Trail and accepted the position as GTUSD Superintendent/Principal of Sutter’s Mill, effective July 1. In 1990, Scott began teaching at GTUSD to a variety of grade levels and special education. He was chosen as Gold Trail’s Principal in 2012 and continued to strengthen a solid team of educators who truly care about their pupils. “I wish Joe all the best in his well-deserved retirement. We are going to miss him, but his legacy will continue to influence the students and employees of this district well. His levels of devotion and care towards his work will serve as an on-going example for the community that is the Gold Trail School District.”

Returning home to become Gold Trail’s new Principal is GTUSD alumni, Boyd Holler. Principal Holler began his GTUSD career in kindergarten at Sutter’s Mill and graduated from 8th-grade at Gold Trail. After completing his education, he taught American Indian students for two years on a remote island in Alaska. He returned to El Dorado County and began teaching at Camino Science and Natural Resources Charter School where he later became the school’s Administrator and Assistant Principal of Camino School. “It is both a professional and personal privilege to contribute meaningfully to this already stellar school while giving back to the educational family that helped raise me,” Principal Holler noted. “I look forward to working side by side with the Gold Trail team, as we help ensure our students achieve their dreams together.”

For more about GTUSD and its schools.